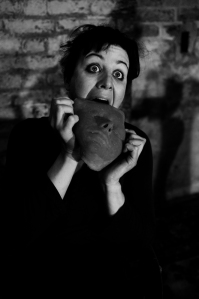 On the left a portrait of the artist, on the right “The High Priestess” from Tarocco series of Yuri Pirondi

Madalena Pinto is a movement artist.
She uses the body and its inevitable condition of movement as a beginning for creation.
Her interest in this subject was primarily explored through sound, martial arts and meditation dances at the same time as she completed a degree in History at the Universidade Nova de Lisboa.
An interest in performing brought her to London where she completed a 3 year diploma programme at the International School of Corporeal Mime with Steven Wasson and Corrine Soum diving deeply into the technique of Etienne Decroux and coming out the other side as an activist of visual theatre.
Moved by beauty and the emotional and mental complexity of human beings, her solo work is an intense picture of life as it happens in our daily routines or in our deepest dreams.

She currently performs as part of The Mime Terrorists, Elastic Theatre and is the Co-Director of the Mission Arts Club in East London.

Amos shein has a Foundation diploma Fine Art from Camberwell College of Arts following BA Fine Art from Chelsea College of Arts. He works in various mediums such as installation art, sculpture, painting, drawing and performance.
Amos shein’s work revolves around transformation, creation of objects and imaginary assemblages / installations made out of discarded objects that were left behind.
Exploring and experimenting with performance, drawings and paintings of repetitive patterns that grow into organic forms.

On the top Freedom Fighters, on the bottom Atomic Magnollia

Drawing is a very different activity for Bruno Jamaica, more physical and less contemplatory.
Whether made with pen and ink on paper, or using elasticated straps out in the public realm,
the lines are less existential as Situationist – detournements of drawing as invasions of public
space.
Translucent geometries in tension with space and landscape, the nature or the buildings,
pawned in reveal human gesture, while construction open to spatial intervention. They are
therefore comments, in communicative evidence of a creative statute that roots in the
occupation figure.
In the drawings the tops of the lines stretched and the structural geometries that
re-qualify a space gives way to a tension in the two-dimensional and graphic plan between the
quasi automatic gesture of scratch (draw) and a political worry of subject illustration.
The city, boats, warehouses, industrial structures, new energy platforms, etc… sounds to
comments more or less naive of critical questions of our time and a civilization condition in
crisis.
But in them the beauty saves everything. the ingenuity reflects a deep optimism, an intemperate faith in the rescue of our consciousness by purity and simplicity.